POWERS CATHOLIC HIGH SCHOOL is a private, Roman Catholic, co-educational high school located near Flint's university corridor and under the direction of the Diocese of Lansing.  In partnership with the family and the Catholic Church, Powers Catholic is committed to passing on the faith in an environment of excellence and to graduate students who are spiritually prepared to impact the world for Christ.  Powers Catholic is rooted in traditions of diversity, academic rigor, family and opportunities for students to flourish outside of the classroom.  Powers Catholic is home to thousands of alumni who today serve their communities as leaders, innovators and servants to the Catholic faith and teachings of Jesus Christ. ​

​Powers Catholic sits among 57 acres of beautiful, wooded property, just west of downtown Flint, and north of I-69 at the Hammerberg Rd exit. The former site of the Michigan School for the Deaf has been transformed into a state-of-the-art high school campus teeming with more than 680 freshmen, sophomores, juniors and seniors learning the necessary skills for a successful life.

The stately Fay Hall, built in 1913, now houses Powers Catholic classrooms and has been regally restored to much of its original design. An abundance of natural light and beautiful views provide an outstanding learning environment for our classrooms. The sweeping lawns in front and behind the building provide outdoor commons for class picnics, social gatherings and recreational activities.

High academic standards set Powers Catholic apart from the surrounding school districts in Genesee County. Among many points of excellence, Powers Catholic is proud to offer a renowned team-taught Honors Humanities program that challenges students academically and encourages them to build their skills for life beyond high school. The school also offers outstanding options in all academic and elective courses including theology, mathematics, science, English, history, fine arts, and foreign language. For the past three decades, Powers Catholic students have ranked significantly higher than state and national averages with ACT test scores and for the past 30 years, Powers Catholic has regularly had students qualify as National Merit semi-finalists and finalists. Powers Catholic is proud to offer two different opportunities for students to earn college credit while in high school. First, students can participate in an Advanced Placement curriculum and 14 different AP tests. Students may also participate in on and off-campus dual enrollment partnerships with the University of Michigan-Flint, Kettering University and Mott Community College.  Students can earn over 30 college credits without leaving the Powers Catholic campus.

Powers Catholic students have graduated and gone on to attend outstanding colleges and universities including Carnegie Mellon, Columbia,  Dartmouth, Dayton, DePaul, Duke, Harvard, John Carroll, Johns Hopkins, Loyola, MIT, Notre Dame, Northwestern, Penn, Princeton, Stanford, the University of Michigan, the University of Chicago, and Yale. To help with the costs of higher education, Powers Catholic graduates have earned over $40 million dollars in academic and athletic scholarships in the last 5 years.  ​

Powers Catholic is most renowned for our faith-based, Catholic education. The faculty wholeheartedly believes in teaching students, not subjects, and Powers Catholic is proud to serve families who believe in God, family, and community. In all endeavors, the administration, faculty and staff pursue excellence and actively partner with students for their personal growth and for the common good. Across the board, Powers Catholic is committed to prepare students for leadership today and tomorrow. As a Catholic school, Powers Catholic is proud of their heritage and faith, instilling in each student the knowledge that all belong to God and are called to the continual transformation of our minds and hearts into the image of Jesus Christ. The Powers Catholic four-day Kairos Retreat program for juniors and seniors underscores the commitment to deepen each student’s relationship with God.
​

EXCELLENCE BEYOND THE CLASSROOM 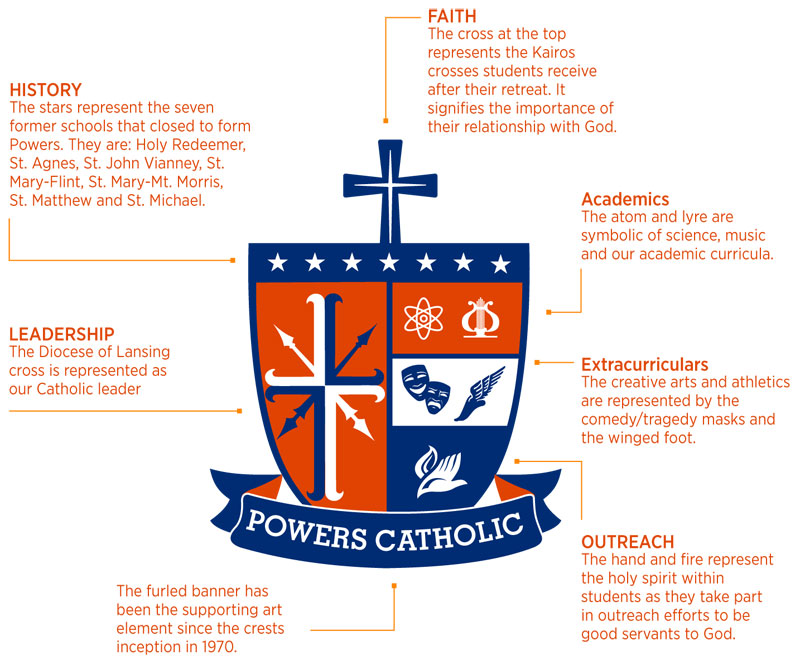